The way Papa  likes to decide where to go on a weekend trip sometimes is to take Google Maps and draw the pointer away from where we are until he finds a place that seems like a feasible drive. Four hours in a car is pretty doable for me. I can entertain myself by pointing out stuff I know, singing some songs, practice my counting, having a few snacks and taking a nap. While in Australia Papa drew a line from Bondi Beach where we were staying to Cowra, NSW. A four hour drive. 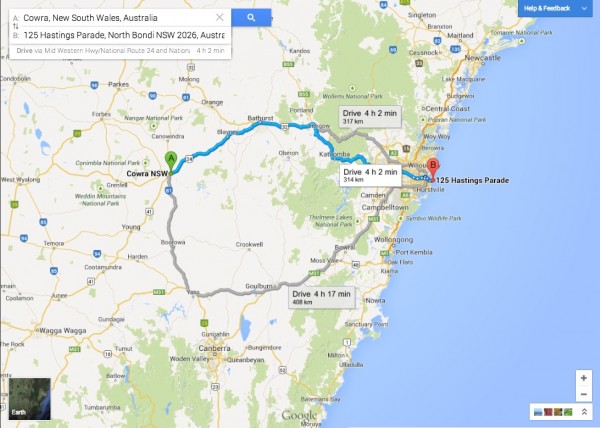 Papa’s way of planning a roadtrip

The drive itself was beautiful. We drove through the Blue Mountains and it was very nice. I have to admit I did fell asleep for part of it. Once we got through the mountains we reached rolling hills with lots of farmland. That meant I could play one of my games; NAME THAT FARM ANIMAL! There were more cows and sheep than I thought existed and I made sure I pointed them all out. 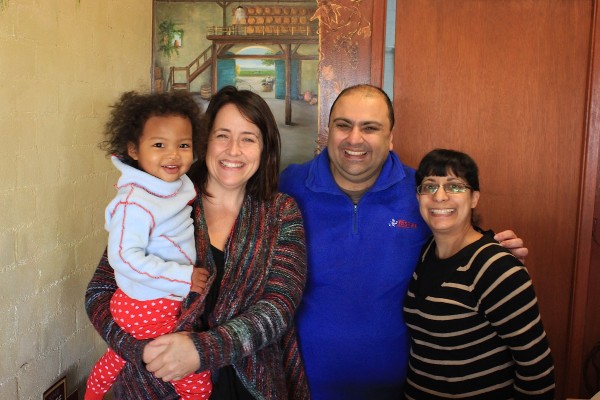 Kaz and Persis the managers of the Vineyard Motel

We stayed at a place called the Vineyard Motel. It was perfect for me because it’s in the middle of a Vineyard and there’s not too much trouble I can run into. The people running it are called Kaz and Persis and they are really nice. Kaz let me help around the place and return I could play with the dogs.

Playing with Bogard the dog 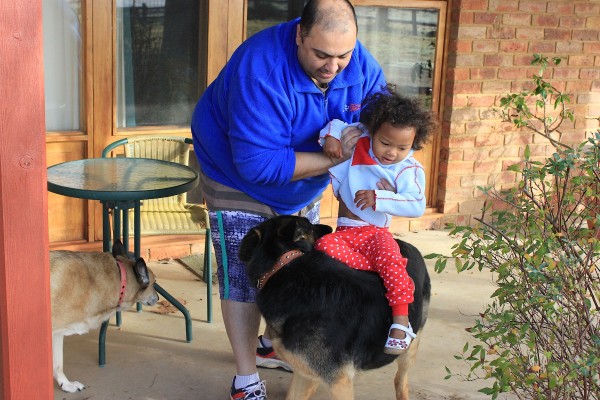 I played with both of them and Kaz even let me ride Bogard but he wasn’t really into it. I just ran around with him and played chase instead. Playing chase is another favourite game of mine. You pretend you chase someone by running towards him while screaming loud. Or in another version of the game, you run away from someone while screaming loud. Notice the difference? 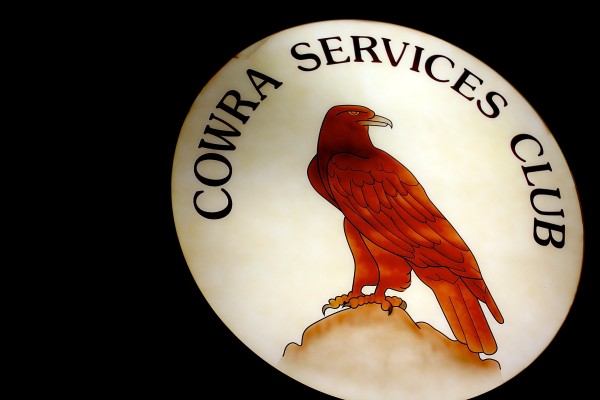 After watching an amazing sunset it was getting dark and we drove back into the little town to grab a bit to eat. Papa likes unassuming authentic places and that suits me just fine. Kaz recommended the Cowra Services Club. There are clubs everywhere in Australia. Something about an old loophole in the liqueur laws but who cares, I loved all of them. They’re a perfect combo of weirdly fascinating and kid-friendly. 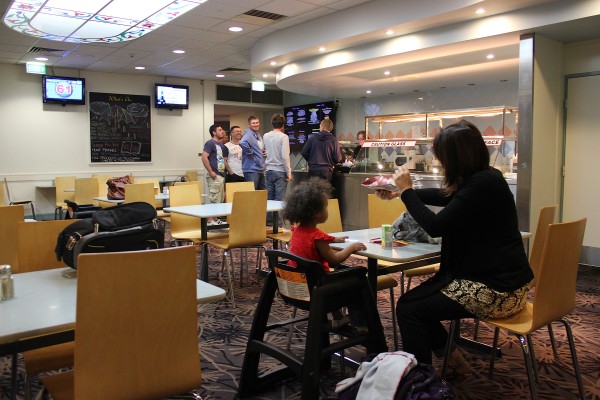 The dining area in the Cowra Services Club

A club typically has different sections. The photo above is from the dining room. It’s brightly lid, perfect for some fine dining. You order at the counter in the back and they give you a thing that looks like a hockey puck and when it lights up and starts buzzing your food is standing on that metal place next to where you order. IT’S MAGIC. If definitely doesn’t work like that at home. 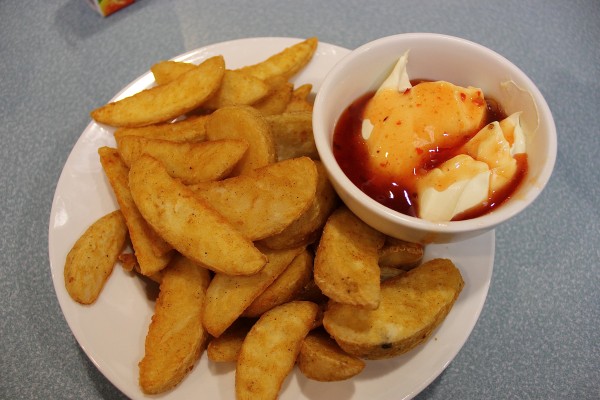 I got to eat an Australian specialty. Potato wedges with sour cream and sweet chilli sauce. They sell it at most pubs and it’s genius. One of the nice things about travelling is that it opens up all kinds of culinary delights you would never think off at home even though you have all the ingredients in your fridge. 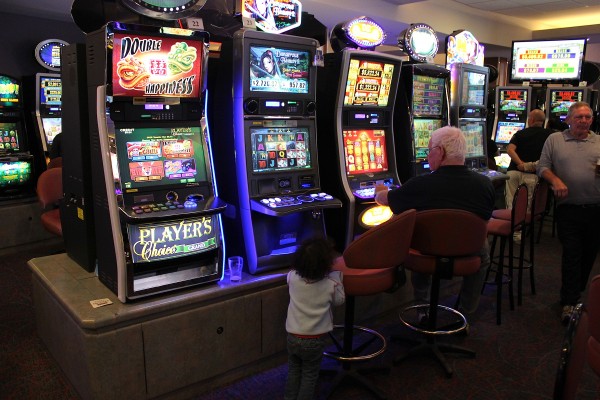 One of the areas I wasn’t supposed to go is where the ‘pokies’ are. I have no idea what they’re for but they sure looked like fun. Blinking lights, flashing colours and lots of buttons to push. The people were really nice too, they all said hi to me but Papa kept grabbing me to take me away. I must have tried a dozen times. 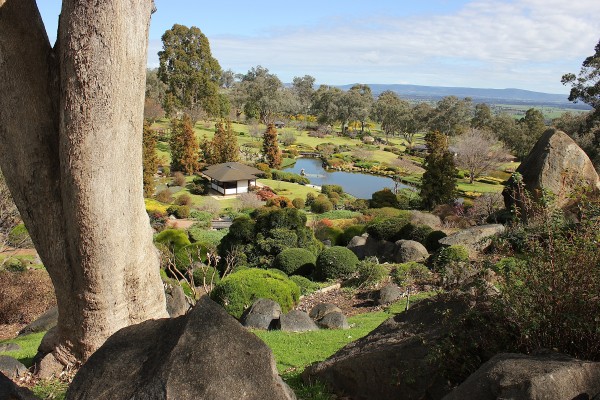 The view from the hill

There was a serious part of our trip to Cowra as well. At the same time when the bad things were happening in Berlin at the places we visited there people were fighting at this side of the world as well. Australia was fighting with Japan and Cowra was a place where Australia kept some Japanese soldiers they took prison. A whole bunch of them tried to escape and many died. The people of Cowra never forgot and took good care of the graves. 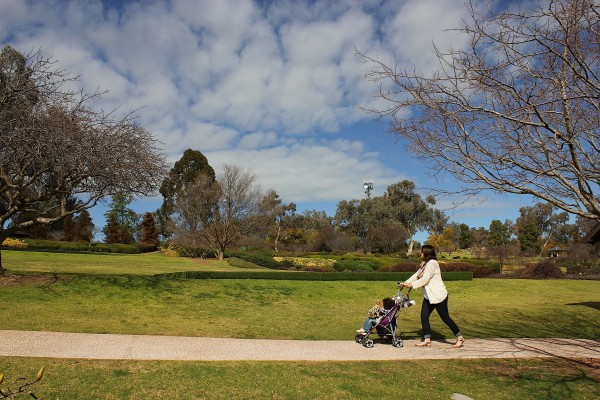 Strolling around the gardens

People from Australia and Japan aren’t fighting anymore and together they build a big Japanese garden to remember what happened a long time ago and to recognize the link between the two countries. I have a very special bond with Japan so it was really nice to be able to visit the gardens. 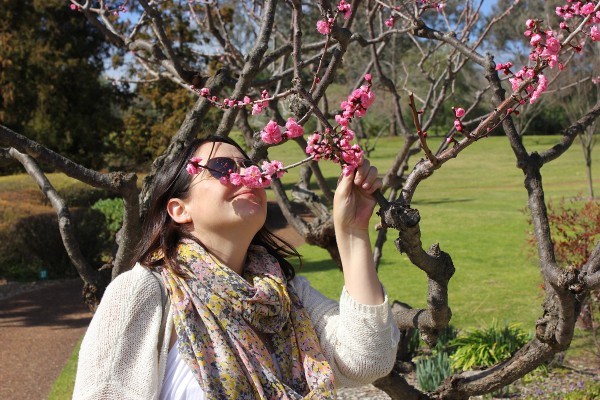 First we had breakfast at the restaurant. Their specialty is scones, jam and cream. Not exactly Japanese but I loved it and so did Mama and Papa. The gardens were very pretty. It was winter still but you could see the first signs of spring. When all the trees are in bloom the place must look magical. 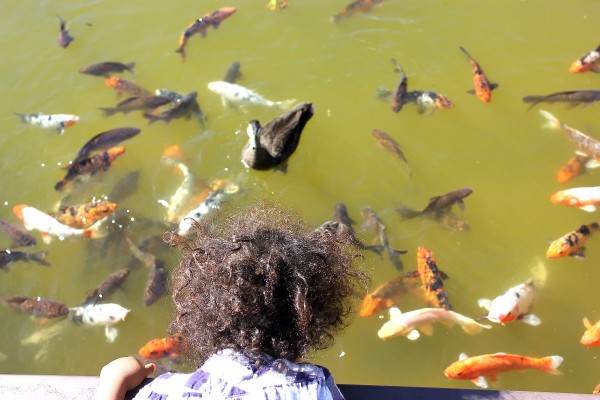 My favourite place was the pond. There were so many fish in all shapes and sizes. Papa brought some leftover scone and we fed it to the fish. I wasn’t really into fish when Papa took me to the Sydney aquarium but I did this time and I cried and screamed appropriately when we had to go to show how much I liked it. 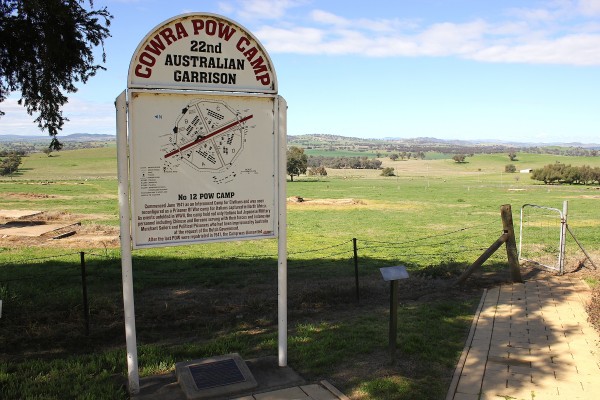 The site of the POW camp

After the Japanese gardens we drove by the cemetery and visited the place where the prisoners were kept. There’s not a lot left to see. It’s basically a big gras field with the foundation of a few buildings and some trees. But like other places on the planet of historical significance you can feel something in the air that makes it different from any other grass field. 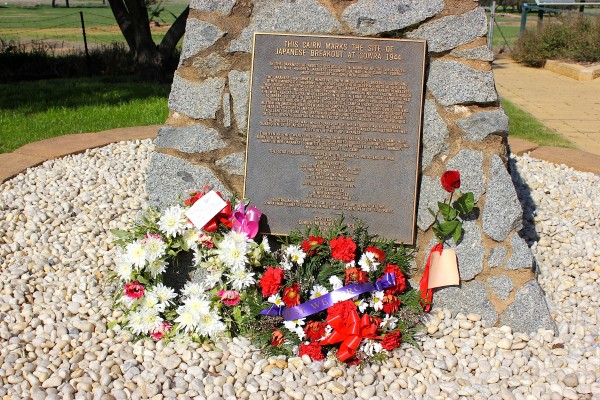 There was a plaque to remember the place where the breakout took place and a rebuilt guard tower. What Mama didn’t know was that there was a voice activated speaker system and it scared the diaper of her.

We took a walk around the field and ran into… KANGAROOS. I love Kangaroos and I met a bunch of them in Wollongong but these were in the wild. And guess what? They love playing chase! 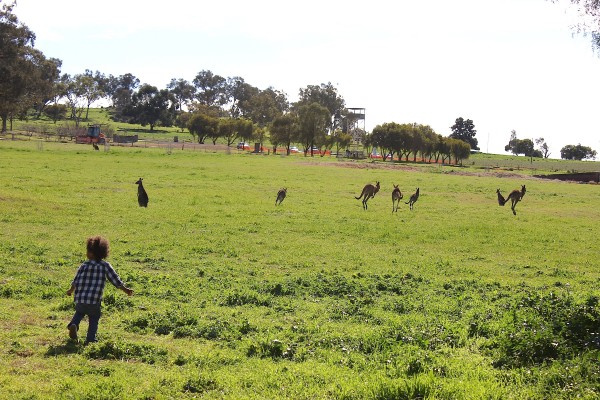 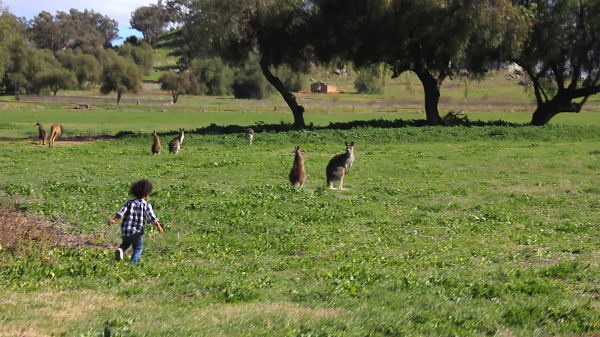 We had a great time in Cowra. Sometimes a random place on a map turns out to offer all kinds of surprises. The Google Map planning Papa uses is working for me.