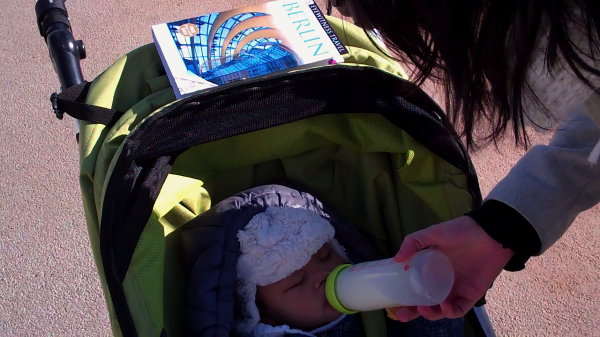 Taking a bottle break in Berlin

Last year I took Mama and Papa to Berlin. Berlin is a fascinating city with a lot of history and a vibrant modern culture. There are lots of things to do. It was March and pretty cold but Mama bundled me up so I was snug as a bug. Mama has a fascination with the second world war and Papa with the communist era. Both well represented in Berlin. I have a fascination with pretty much anything so there was enough to do for all of us. I couldn’t walk yet so I sat back and watched the scenes and history go by as we went on our stroller tour.

Berlin Wall
Turns out Berlin was divided into two sections for a long time and most people weren’t allowed to go from one to the other. To make sure people stayed in their section they build a big wall. It’s a bit like at home where I can’t go to half our home because Mama and Papa put a big gate up.

In Berlin people sometimes had friends and family on the other side and they couldn’t see each other. That must have been very sad. Of course people didn’t like that and they eventually teared it down so they could hug each other again.

Most of the wall is gone but a few small sections are still there and we walked by. 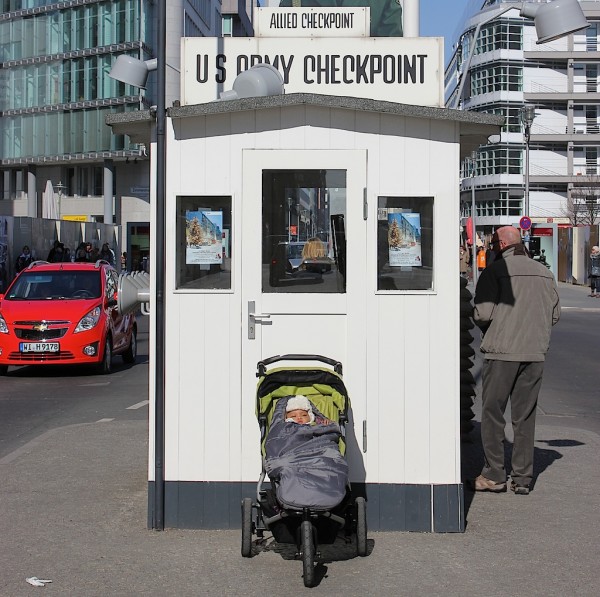 Checkpoint Charlie was one of the places were people could go to the other section. A lot of people wanted to but not very many people were allowed. There were big gates and people with guns. At one point there were even tanks and it almost started a war. Mama and Papa were reading a lot of big signs with information about it.

Topography of Terror
Before the wall came up there were some bad people in Berlin and they did some very bad things. Papa and Mama didn’t tell me much about it but we visited an information centre and walked around in a park. The building that used to stand here where a lot of these things were orchestrated.

The next stop of our stroller tour was the Führerbunker. I don’t know what that means but Papa told me that the man who started all the bad things ended his live here after a big war. There’s not much to see except for a sign that explains things.

Memorial to the Murdered Jews of Europe 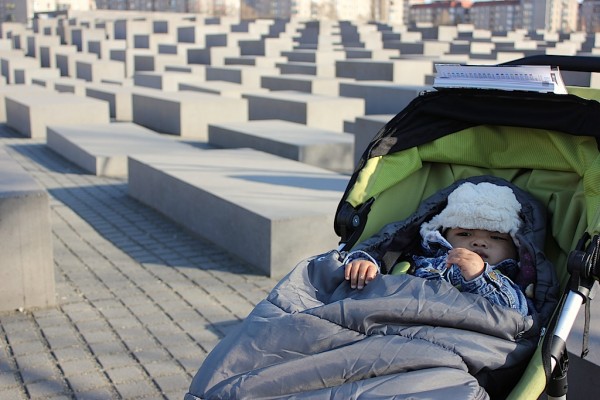 The impressive Memorial to the Murdered Jews of Europe

Really close to the Führerbunker is the Memorial to the Murdered Jews of Europe. A very impressive sight. Hundreds of big concrete slabs are needly aligned. They vary in height and there are paths in between them.

This memorial remembers the bad things that happened and the people that died. Papa and Mama walked through the memorial with me and so did a lot of other people.

We visited a museum below the site and that’s where they told stories from the people who died. I know it was an important place but I was also only 8 months old and hungry so Papa took me upstairs to get something to eat. Mama spent a lot of time at the museum. 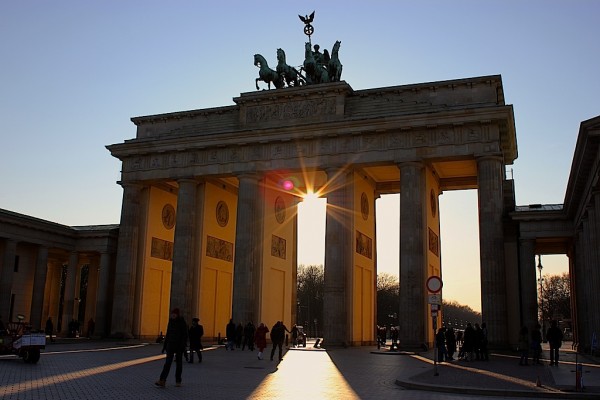 We finished our walk at the Brandenburg Gate. Because there has been a lot of war in Berlin there aren’t a lot of old buildings anymore but this is one of them. This gate was part of the wall and serves as a symbol of the unity between the joined halves of the city.

Berlin is impressive and we only covered a small part of it. I’m going to put in on my list to visit again someday when I can walk.